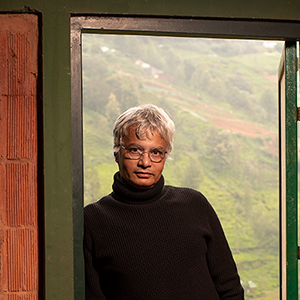 Uday Parkar is a multifaceted personality. Known as an Adman who is much beyond Advertising. Over an illustrious career of 30+ years, he worked with the giant Advertising Agencies of India as a Creative Director & Consultant winning 150+ national & international awards & recognitions from across globe including Cag, Clio, One Show, Cannes, New York Festivals, Rx, A&M’s to name a few. His work is published in dozens of archives like One show, Creativity, London International, New York Festival etc. Uday is known for the successful brands he has created & nurtured over the years.

Wanting to become an Architect, circumstances brought him into Advertising. Uday believes one of his strongest assets is pencil scribbling. Many successful brands, advertising campaigns and space design concepts are born out of it. He started living his dream as a space designer in 2014 & developed a distinct style of creating brand spaces. His style of space designing became widely popular and has brought tremendous success to businesses. From the age of 26 when he became the youngest judge in Indian Advertising till now, he has been sharing his knowledge & experience & has conducted 70+ workshops across the country and still counting. He is the first Indian to be recognized as an ‘Art Director of the Year’ by Adfest. Also the first to be recognised as ‘Designer of the year’ by A&M in 1996.

Uday Parkar is currently heading a creative group called ‘Parking’ offering Brand Design, Advertising, Space Design solutions under one roof. He also independently conducts creative workshops under the banner ‘A Day With U’day’ which is popular among Indian creative industry & has drawn participants from across the nation.