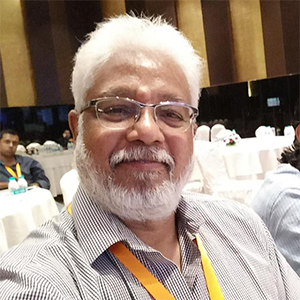 Although an Economics and Statistics graduate, and holding a degree in Law, Rajan has always been a writer by passion. He has worked in some of the (arguably) most creative agencies in the country: Contract Advertising, Enterprise Advertising, Nexus Equity (Co-Founder-Director), Ambience and TBWA Anthem.

He has worked on some of the best known brands and campaigns in the country:

The full list covers virtually all categories of products and services any advertising professional could hope to be associated with. He has had the privilege of working with some of the best-known and acknowledged professionals in the advertising industry: Mohammad Khan, Elsie Nanji, the late Anand Halve, Ashok Kurien, Arun Kale, Preeti Vyas Gianetti, Shabnam Sirur…

As Head of Creative, he was also responsible for hiring, and training youngsters in the Creative Department, and management trainees in the intricacies of advertising creative work. For several years, he was on the Panel of Judges for the Advertising Club, Bombay, CAG, and several other advertising clubs and organizations.

He is enthusiastic about computers and technology, and was Co-Founder-Director of Infocast Technologies and compassbox.com, a pioneering online education portal.

He was Visiting Faculty at MICA for 16 years in the Crafting Creative Communications (CCC) programme. He has conducted Copy Writing workshops at several colleges, as well as workshops on Developing Communication Skills, Advertising Effectiveness and Creativity. The workshops were conducted for Malayalam Manorama Group, Mid Day (and several other publications), Asian Paints, CIPLA, Abbott Labs, Tata Group, and Sony Entertainment, to name a few. He was also on a month-long training mission overseas for Grey (Advertising) Worldwide, to bring their Creative Team up to international standards.

He has won more than 150 National and International awards for Excellence in Creative Advertising.