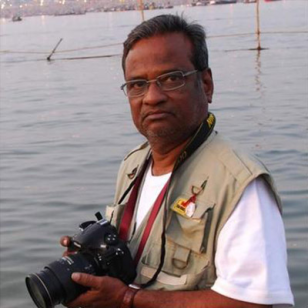 Desikan Krishnan has been a photographer for over 40 years

Joined THE HINDU in 1978 and for 12 years till 1990 covered almost all sports  at the national or international level which includes 2 cricket world cups 2 Asian games and 1 Olympics. Re-joined The Hindu in 2005 as their picture Editor. Heading a team of over 150 photographers and photo stringers all over India. Instrumental in setting up the digital archives in The Hindu which has over 1.5 million images in negatives and transparencies

Has travelled extensively in India to its most remote corners for features on tribal life and has published over 30 photo features in the Frontline magazine. Memorable amongst them are The Cholanaiken in Kerala, the only tribe that lived in caves, the Bondas of Orissa where he spent a week on a diet of roots and herbs, Reangs of Tripura. A journey through Nagaland for 45 days and another in Rajasthan, Jailsmer up to the Pakistan border where the last 20 Kms. had to be done on camels as no vehicle could cross the high sand dunes.

Has covered the 1984 Election campaign of Rajiv Gandhi extensively in the northern belt and at the same time the Bhopal Gas tragedy.Has met and photographed the Srilankan Tamil leader Prabakaran and was once in Jafna for 10 days for an exclusive photo shoot of him.

Faculty at the Asian College of Journalism for the last 22 years .

Is a Jury for the national competitions conducted by the ministry of information Govt. of India and several other photographic competitions.

Has the only known photographic record of the city of Chennai between the years 1880-1930 all in glass plates. Has just completed a major photo documentation project in Kancheepuram where he has photographed around 400 temples and has shot over 100000 frames. Has covered the last Kumbh Mela at Allahabad and has also documented the Harapan excavations near the Rann of Kutch in Gujarat and other places.

Currently working on documentation of the Forts in Tamilnadu.