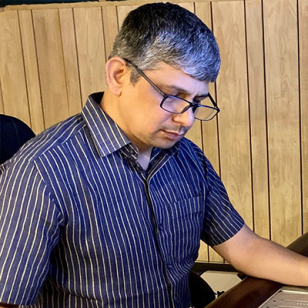 Divakar is a music composer/producer, percussionist and academic researcher. He works as a music composer in India’s creative music and film industries and has more than 200 projects that include a wide range of radio and television commercials and film songs to credit.

His concerts across India, in the United States of America, Switzerland, Turkey and the United Kingdom, and collaborative work with musicians from Srilanka, Switzerland, Belgium, France, Germany, Italy, Greece, Hungary, Ireland, England, Wales, Scotland, Nigeria and the USA have had a significant influence on his compositions. He is one of the very few privileged Indians to have performed at the United Nations, New York.

Divakar holds a Master of Science degree in Advanced Music Production from the University of Glamorgan.  After working as a lecturer at the Department of Drama and Music, Cardiff School of Cultural and Creative Industries, University of Glamorgan for six years, Divakar returned to India to establish the School of Indian Film Music (SIFM). He is also attached to the Skillset Screen Academy, Wales, a member of the British Forum for Ethnomusicology and the Association of British Scholars in India.